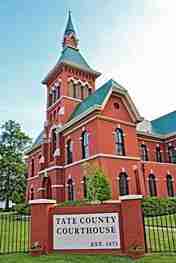 The cornerstone for the Tate County Courthouse was laid in June 1875 with an extravagant celebration.  Two trainloads of visitors from Memphis joined local citizens from throughout the county for a celebration that included a large parade down Ward Street led by the Temperance Ladies.

Tate County’s unique Italianate courthouse was constructed for $19,800.  Additions were made to the courthouse in 1904 and again in 1975. The new courthouse annex was completed in the summer of 1999.  During the most recent renovation, the courthouse’s exterior brick, which had been locally made, could not be returned to its original unpainted state because of its porous nature.  A paint color was carefully chosen to echo the color of the natural brick, returning the Tate County Courthouse to look as it did when it was first built in 1875.  The cost of the new annex and renovations to the original courthouse was $3,152, 900.

During the renovation, the Senatobia Main Street placed a time capsule under the new concrete sidewalk leading to the front door.  A commemorative stone was laid to locate the capsule with an inscription which reads, “Time Capsule, Tate County, 1873-1998, Open 2098”.  Mementos  placed in the capsule included a 125th commemorative anniversary edition of the local newspaper The Democrat, a Bible, a Tate County phone book, a 1998 one-dollar bill and a copy of the book The History of Tate County.

The Tate County Courthouse was added to the National Register of Historic Places in 1994.  In 2002, it was awarded the Mississippi Heritage Trust award for excellence.  In the summer of 2010, the James Gilliam Chapter, MSDAR, recognized the significance of the historic courthouse with an historic marker.

The Tate County Courthouse may be experienced by self-guided tours, Monday –Friday, 8:00-5:00.  Museum exhibits are displayed in various areas throughout the courthouse.  And the historic court rooms may be seen when court is not in session. History of the Town of Coldwater

The current town square of Coldwater, Mississippi is located about two miles south of the Coldwater River, hence the name.  The original town actually began as the village of Elm Grove in 1856. With the coming of the Mississippi-Tennessee railroad in 1858, rows of stores and other businesses developed on both sides of the tracks, along with houses of worship.  Coldwater was officially incorporated in 1872.  At that time, the Town was located in DeSoto County and was a mile square with the railroad depot at the center.  When another Mississippi county was created in 1873 from land originally located in DeSoto, Marshall, and Tunica counties, Coldwater found itself to be a part of the newly formed Tate County.

The Town began to grow with an influx of settlers from Virginia, the Carolinas, Alabama, and others seeking a better life for themselves and their families. There were 397 residents of Coldwater according to the 1890 census.  Educating their children was obviously important to the early settlers. By 1884, there were 96 small schools in Tate County, 54 white and 42 black.  They were mostly one teacher, one-room log houses with split logs for seats.
Coldwater opened its first public library in April 1951 to serve the 949 people who lived there according to the 1950 census. The Library was located in the office of the C.O. Pate Insurance Office on land where the present post office is located.  At that time, the Library was open during the office hours of the insurance office. The Town of Coldwater provided the shelves for the Library. The Library was physically moved to different quarters in May 1981 – into a building on Central that was, at one time, the home of the superintendent of the Coldwater School System.

The Library operated under the contract between Tate County and the First Regional Library, headquartered in Hernando.  Mrs. Mabel Burford was named the first Librarian of the Coldwater Public Library, followed by Mrs. Katherine Bourland who served from April 1953 until September 1976.  Mrs. Mabel McGee served as Head Librarian from October 1976 until early 1981.  Mrs. Viola Brown served as Librarian from April 1981 until her unexpected death in September 1997.  Tenise Faulkner served as the Branch Manager from 1997 until late 2006.  Tasha Jackson-Sow was selected as the Branch Manager in 2006 and serves in that capacity today.

Coldwater opened its 6,000 square feet modern public library building in 2003.  The Jesse J. Edwards Public Library is a splendid example of what community planning and dreaming can accomplish.  The Library offers twelve computer stations for the public, complete with access to the Internet, two meeting room spaces and a special amphitheater for the children.

Over the years, Coldwater has produced a number of outstanding citizens.  Jesse J. Edwards, Jr., for whom the new library building is named, is certainly one of those individuals.  Born and raised in the Coldwater area, he served as the first African-American mayor of Coldwater.  It was because of the vision of Dr. Edwards that the new Library building came into being – and that it would house a special collection of materials about the history of Coldwater.

Other famous people who hail from the Coldwater area include Dr. Dumas Malone, Pulitzer prize-winning historian and noted Jeffersonian scholar, born in Coldwater on January 10, 1892.  Dorris Bowdon Johnson, a Coldwater native, was a screen actress who played in several motion pictures in the 1930’s and 1940’s alongside such Hollywood legends as Henry Fonda. Thomas Webber Wilson, a three-term U.S. Congressional Representative from Mississippi from 1923-1929, was born in Coldwater on January 24, 1893.  Congressman Webb Wilson died in Coldwater in 1948 and is buried in the Magnolia Cemetery.

The broadcasting pioneer Hoyt B. Wooten was also a Coldwater native.  By 1919, Wooten had started his first commercial radio station in Coldwater, WKNG.  He moved the radio station to the Peabody Hotel in 1929.  On January 1, 1956, his WREC-TV, Channel 3 began regular programming to the Mid-South community.  His father, Spencer D. Wooten, known affectionately as “Mr. Spencer,” served the Town as an alderman, as Mayor, as president of the school board, and as undertaker, among other things.  The log house that his father (also named Spencer D.) built is still standing on Hwy 306 near the Antioch Church of Christ, currently occupied by Mrs. Kathryn Gaines.

Over the course of its history, Coldwater steadily grew in numbers.  However, periodic river flooding plagued the town, as the river would all too often swell its banks, spilling onto area farmland.  When the Arkabutla Lake and Dam project was built in the early 1940’s, the Town felt it had to move.  So, in 1942, the Town of Coldwater moved – lock, stock, and barrel, to land just about a mile and a half south of its original location.  Today, there are over 1,600 people enjoying life in this “new” location.

Truly the Town of Coldwater has an interesting and rich history, a record of which now exists in the new Coldwater Room of the Jesse J. Edwards Public Library. This special room contains historical materials that have been collected, cataloged, and now made available to researchers of all ages eager to learn about “the big move” or to those trying to trace their ancestors The History of Senatobia, Mississippi

On April 13, 1834 early settler James Peters purchased two sections of land from the Chickasaw Nation for the sum of $1.25 per acre.  The land purchased later became the town of Senatobia.  The name Senatobia was derived from the Indian word Senatohoba, which means “White Sycamore” and is a symbol of “rest for the weary.”  Charles Meriwether named Senatobia.

Senatobia was originally a rest stop on the trail leading to Hot Springs, Ark.  According to legend, the Indians discovered the curative powers of the hot springs and periodically made long trips to Arkansas, stopping to rest in the area that became Senatobia.  After the Tennessee and Mississippi Railroad came through in 1856, Senatobia became a railroad station.  New commerce came with the railroad and Senatobia saw immediate growth.

Senatobia, the county seat for Tate County, received its charter as a municipality in 1860, thirteen years prior to the creation of Tate County and just one year before the beginning of the Civil War.  During the course of the Civil War, Senatobia’s business section was burned twice by Federal Troops.

The 1880 census accounted for over fifty active businesses, a newly established newspaper and several physicians in Senatobia. 1874    Many wooden buildings on Main and Front Streets were destroyed by fire.

1875    The cornerstone of the Tate County Courthouse, located in downtown Senatobia, was laid on June 24.

1881    Senatobia had two gristmills and cotton gins, each in first class running order.  Single railroad fare to Memphis was $1.55.

1882    The Senatobia town charter was misplaced.  Anyone knowing of its whereabouts was asked to report the same to the mayor or aldermen.  The town treasury was reported as being exhausted but out of debt.

1885    N.M. Ward of Senatobia advertised the sixteen-room Greely Hotel for sale.  The hotel was reported to be located on the south end of Front Street.

1891    In October of this year, a group of 172 Confederate veterans held a reunion in Senatobia.

1897    A new water system was installed replacing wells and cisterns formerly used.  A power generating plant was installed in a building on North Ward Street.  Lights were turned on from 5 p.m.-10 p.m. and again from 5 a.m.-8 a.m.

1910    A group of Senatobia citizens asked the Mayor and Board of Aldermen to pass ordinances restricting the use of automobiles on the streets in town.  Automobiles were said to be a source of danger and they frightened horses.

1912    Ice was sold from a new icehouse, which was located in an insulated warehouse on the railroad tracks in Senatobia.

1917    Senatobia’s first gas pump was installed on the southwest corner of Main and Front Streets.

1919    All vehicles in Senatobia were required to have two lights on the front and one on the rear.  The speed limit was 12 miles per hour.

1926    Senatobia had 241 customers serviced by electricity.

1927    Senatobia streets were paved and the Tate County Agricultural High School expanded to include a junior college.

1932    Senatobia Bank and Peoples Bank kept their doors open during the great depression while many others closed permanently.

1950    Senatobia’s population was 2,108 and the Senatobia Public Library opened.

1955    Senatobia Chamber of Commerce was organized.

1962    Interstate 55 opened, connecting the state of Mississippi with points north.