Located less than 30 minutes north of Tate County via I-55, the Memphis International Airport provides cargo and passenger services, as well as general aviation services.

Memphis is also the number one cargo hub in the world-it is home to  7 cargo airlines including the FedEx Super Hub, a major UPS hub, Air Transport International, and an RPS sort facility.   Drop off shipments can be made to FedEx as late as 11:00 p.m. for next-day delivery 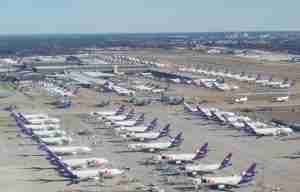 The Metro Park Airport located in Olive Branch is the second-busiest airport in the State of Mississippi and is about 35 minute drive from Tate County. The airport has a 6000-foot paved and lighted runway, offers charter service, and new air traffic control tower.  Olive Branch AirNav;  Olive Branch GlobalAir

Panola County Airport located in Batesville, 10 to 15 minutes from Tate County,  is used for general aviation. It is owned and operated by Panola County. Contact the manager at 662-563-4100.