Located along the scenic Coldwater River midway between Hernando and Senatobia, Mississippi, Coldwater is a quiet little community of tree-lined streets and friendly people with a “down home” atmosphere.
The fertile soil along the Coldwater River attracted early settlers to the area from Virginia, the Carolinas, and Alabama. The Coldwater River and its tributaries ting the city providing opportunities for recreation and fishing.
Coldwater provides a small town atmosphere with a mix of neighborhoods filled with both historic and contemporary homes. With its multiple developable tracts, it is no wonder that Coldwater is attractive for both residential and business development.
We welcome you to Coldwater … A Wonderful Place to Call Home.

History of the Town of Coldwater

The current town square of Coldwater, Mississippi is located about two miles south of the Coldwater River, hence the name.  The original town actually began as the village of Elm Grove in 1856. With the coming of the Mississippi-Tennessee railroad in 1858, rows of stores and other businesses developed on both sides of the tracks, along with houses of worship.  Coldwater was officially incorporated in 1872.  At that time, the Town was located in DeSoto County and was a mile square with the railroad depot at the center.  When another Mississippi county was created in 1873 from land originally located in DeSoto, Marshall, and Tunica counties, Coldwater found itself to be a part of the newly formed Tate County.

The Town began to grow with an influx of settlers from Virginia, the Carolinas, Alabama, and others seeking a better life for themselves and their families. There were 397 residents of Coldwater according to the 1890 census.  Educating their children was obviously important to the early settlers. By 1884, there were 96 small schools in Tate County, 54 white and 42 black.  They were mostly one teacher, one-room log houses with split logs for seats.
Coldwater opened its first public library in April 1951 to serve the 949 people who lived there according to the 1950 census. The Library was located in the office of the C.O. Pate Insurance Office on land where the present post office is located.  At that time, the Library was open during the office hours of the insurance office. The Town of Coldwater provided the shelves for the Library. The Library was physically moved to different quarters in May 1981 – into a building on Central that was, at one time, the home of the superintendent of the Coldwater School System.

The Library operated under the contract between Tate County and the First Regional Library, headquartered in Hernando.  Mrs. Mabel Burford was named the first Librarian of the Coldwater Public Library, followed by Mrs. Katherine Bourland who served from April 1953 until September 1976.  Mrs. Mabel McGee served as Head Librarian from October 1976 until early 1981.  Mrs. Viola Brown served as Librarian from April 1981 until her unexpected death in September 1997.  Tenise Faulkner served as the Branch Manager from 1997 until late 2006.  Tasha Jackson-Sow was selected as the Branch Manager in 2006 and serves in that capacity today.

Coldwater opened its 6,000 square feet modern public library building in 2003.  The Jesse J. Edwards Public Library is a splendid example of what community planning and dreaming can accomplish.  The Library offers twelve computer stations for the public, complete with access to the Internet, two meeting room spaces and a special amphitheater for the children.

Over the years, Coldwater has produced a number of outstanding citizens.  Jesse J. Edwards, Jr., for whom the new library building is named, is certainly one of those individuals.  Born and raised in the Coldwater area, he served as the first African-American mayor of Coldwater.  It was because of the vision of Dr. Edwards that the new Library building came into being – and that it would house a special collection of materials about the history of Coldwater.

Other famous people who hail from the Coldwater area include Dr. Dumas Malone, Pulitzer prize-winning historian and noted Jeffersonian scholar, born in Coldwater on January 10, 1892.  Dorris Bowdon Johnson, a Coldwater native, was a screen actress who played in several motion pictures in the 1930’s and 1940’s alongside such Hollywood legends as Henry Fonda. Thomas Webber Wilson, a three-term U.S. Congressional Representative from Mississippi from 1923-1929, was born in Coldwater on January 24, 1893.  Congressman Webb Wilson died in Coldwater in 1948 and is buried in the Magnolia Cemetery.

The broadcasting pioneer Hoyt B. Wooten was also a Coldwater native.  By 1919, Wooten had started his first commercial radio station in Coldwater, WKNG.  He moved the radio station to the Peabody Hotel in 1929.  On January 1, 1956, his WREC-TV, Channel 3 began regular programming to the Mid-South community.  His father, Spencer D. Wooten, known affectionately as “Mr. Spencer,” served the Town as an alderman, as Mayor, as president of the school board, and as undertaker, among other things.  The log house that his father (also named Spencer D.) built is still standing on Hwy 306 near the Antioch Church of Christ, currently occupied by Mrs. Kathryn Gaines.

Over the course of its history, Coldwater steadily grew in numbers.  However, periodic river flooding plagued the town, as the river would all too often swell its banks, spilling onto area farmland.  When the Arkabutla Lake and Dam project was built in the early 1940’s, the Town felt it had to move.  So, in 1942, the Town of Coldwater moved – lock, stock, and barrel, to land just about a mile and a half south of its original location.  Today, there are over 1,600 people enjoying life in this “new” location.

Truly the Town of Coldwater has an interesting and rich history, a record of which now exists in the new Coldwater Room of the Jesse J. Edwards Public Library. This special room contains historical materials that have been collected, cataloged, and now made available to researchers of all ages eager to learn about “the big move” or to those trying to trace their ancestors 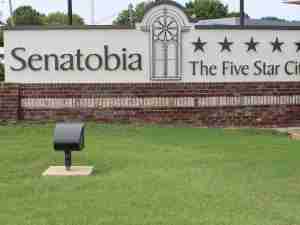 The City of Senatobia is a thriving, bustling, growing community located only 30 minutes south of Memphis , Tennessee . Senatobia is the county seat of Tate County and is located along Interstate 55. Senatobia’s population is about 7,000 people, while Tate County has about 27,000. As our community grows, so does our reputation as a great place to live!Watch the ‘Tobie Town’ video on youtubeIn Senatobia, you will find a superb quality of life with excellent public and private schools from kindergarten through the community college level; easy access to universities and continuing education; inviting, well-kept neighborhoods and affordable homes; retail shopping; recreation for the whole family; and good, solid hometown values. The quality of life in Senatobia is one of the best, complemented by a cost of living that is among the best in the nation.Senatobia is home to the main campus of Northwest Mississippi Community College and to two excellent K-12 school systems: Senatobia Public Schools and Magnolia Heights School.According to a published history of Tate County , the City of Senatobia was founded on two sections of land purchased in 1834 from the Chickasaw nation for $1.25 per acre. The name “Senatobia” was derived from the Indian word ” Senatohoba ,” which means “white Sycamore” and is a symbol of ” rest for the weary.” Senatobia received its charter as a municipality in 1860.With many residential areas under construction, Senatobia continues to grow at a sustainable pace. It is a great place to own a home, raise a family, and be a part of a caring community. Come and see for yourself.